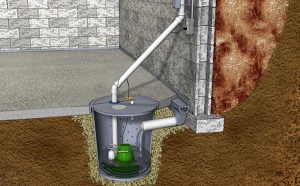 A sump pump is a small pump installed in the lowest part of a basement or crawlspace. Its job is to help keep the area under the building dry and to prevent it from flood­ing. Usually, sump pumps are installed in specially constructed sump pits. Water flows into the sump pit through drains or by natural water migration through the soil. The sump pump’s job is to pump the water out of the pit and away from the building so the basement or crawlspace stays dry.

According to the American Society of Home Inspectors, more than 60 percent of American homes suffer from below-ground wetness. But even more, homeowners are likely to have to deal with a flooded basement at some point. It doesn’t take much water to cause thousands of dollars of damage. A moist basement can also lead to mold and mildew growth, bringing with it all its related health and breathing hazards.

Sump pumps have been a common fixture in some homes for years, primarily in low-lying areas or places where r­apid melting of heavy snow can lead to flooded basements. However, legislation, including amendments to the U.S. Federal Clean Water Act in 1987, has made sump pumps a requirement in homes that aren’t necessarily at a high risk for flooding. Today, sump pumps are common in new construction homes.

A sump pump usually stands in a sump pit — a hole with a gravel base about 2 feet (60 centimeters) deep and 18 inches (45 centimeters) wide — dug in the lowest part of your basement or crawlspace. As the pit fills with water, the pump turns on. It moves the liquid out of the pit through pipes that run away from your home to a spot where the water can drain away from your foundation. The pipe usually has a one-way valve called a check valve at the pump end to keep the water from flowing back into the pit.

Most sump pumps turn on automatically through a float activator arm or a pressure sensor. The pressure sensor works just like its name suggests: Water exerts more pressure on the sensor than air does, which causes the pump to activate. The float activator works a lot like the one in your toilet tank. A buoyant ball floats on top of the water, manually moving the arm as the water level rises. You can also buy a manually operated pump, which works only when you decide to turn it on, but these aren’t as common because of their lack of convenience. Automatic pumps also have an option for you to activate the pump if the float arm or sensor should fail to work.

The typical home sump pump uses a centrifugal pump to move water. When the motor is on, it causes a screw- or fanlike device called an impeller to turn. Using the centrifugal force, the spinning impeller forces water toward the sides of the pipe, creating a low-pressure area at its center. Water from the pit rushes to fill the void, and the impeller’s spinning action pushes it out through the pipe.

Sump pumps for home use are powered by electricity and use standard household current, so they don’t require specialized wiring beyond a grounded outlet. Since the pump is always in or near water, it’s a good idea to have a ground fault circuit interrupter on the outlet to prevent accidental electrocution.

There are two primary sump pump designs, both of which are about 2 1/2 to 3 feet (76.2 to 91 centimeters) high. A submersible pump rests in the water. It’s encased in a waterproof housing, with the pump itself at the bottom and the outlet pipe near the top. A flat-screen or grate covers the bottom of the pump to keep out debris. When the pump turns on, water is sucked up through the grate and routed into the pipes and out of your home.

The other common type of sump pump is the pedestal pump. Pedestal pumps look something like a long stick with a fat head. The pedestal keeps the pump out of the pit, away from the water even when the pit is full. An inlet pipe reaches down into the bottom of the pit to draw the water out. Since the motor and pump are out of the water, pedestal pumps are usually louder — but less expensive — than submersible pumps.

Depending on the laws in your area, you may not need a sump pump. For example, if you’ve never had standing water in your basement and it’s consistently warm and dry, a sump pump probably wouldn’t do you much good. However, if the area under your house floods occasionally or feels damp and smells musty, there’s a good chance y­ou have an issue with moisture entry. Along with other waterproofing steps, a sump pump would make your basement a healthier space and protect any possessions and appliances you store there.

One way you can check whether moisture is getting into your home through your basement floor or walls is by taping a 2-foot-square (61-centimeter-square) piece of plastic onto the surface and leaving it in place for a day or two. If you’re not sure where the moisture may be coming in, it’s a good idea to do this in multiple spots. After a couple of days, check under the plastic — if it’s wet, you have a moisture problem.

The first step in dealing with basement moisture is to air it out and run a dehumidifier. Since most moisture that ends up in a basement comes from water draining around your foundation, check to see that your gutters and downspouts are in good repair and directing water at least 6 feet (1.8 meters) away from your foundation. In a couple of weeks, repeat your plastic sheet test — if it shows moisture, a sump pump may be a good idea.

Since sump pumps have many options available, when choosing one, you need to make some decisions:

Most sump pumps are equipped with water level or flood alarms, usually, battery powered, that alert you if the pump isn’t working properly and water is backing up. More sophisticated systems can notify your alarm company or call your cell phone if the water starts to rise. Fortunately, this shouldn’t happen often. Sump pumps, on the whole, are quite reliable. But as with any other important piece of equipment, regular maintenance is always a good idea. Spend a few minutes every couple of months, when heavy rains are forecast and in early spring to ensure reliable sump pump operation. Basic sump pump maintenance is usually as simple as doing these few jobs.

Another important point is the sump pump’s power supply. The fact that sump pumps rely on electricity to operate does make them vulnerable in the event of a power outage. Fortunately, there are backup options available. For some people, at least those on municipal water systems — and assuming the city water system is still functional — water-powered sump pumps that don’t need any electricity are an option. These pumps literally use the pressure of flowing water to pump water out of the sump. The downside to this design is that the pumping process uses virtually the same amount of city water as the quantity of water it pumps out. So, while water-powered pumps aren’t necessarily a good choice for a main pump, they offer a viable option for a short duration backup pump.

Sump pumps with backup battery power are also commonly available. The backup power comes from a car battery — or even better, a deep cycle boat battery. Most of the systems charge the batteries while the power is on, ensuring the battery is fully charged in the event of a power outage. Alternatively, a trickle charger used for car batteries is also an option.

Some homeowners use backup gasoline or diesel generators to provide their own electricity in the event of a power outage. Since a small sump pump needs 800 to 100 watts to operate and can draw up to 1,800 watts when starting, a backup generator needs to be sized properly and, of course, well maintained.

If all else fails, you can turn to a hand-operated bilge pump or a bucket brigade to move water out of the pit during a power outage.